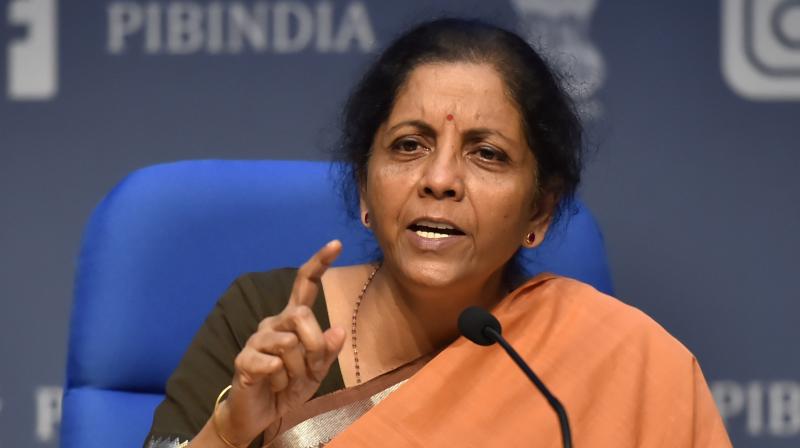 New Delhi: Finance Minister Nirmala Sitharaman on Friday said that the Central government was not reneging from its responsibility on GST compensation and the issue will be discussed in Goods and Services Tax (GST) council meeting.

Replying to the debate on the supplementary demands for grants (first batch) for 2020-21 in the Lok Sabha, Sitharaman accused the Opposition of trying to twist her ‘Act of God’ remark. She said the Centre has taken several steps to protect the interest of states.

The minister said that India’s forex reserves have surged to a high of USD 537 billion, which is 19-month equivalent of imports.

“I am very happy. Everybody would have liked forced measures in extraordinary circumstances using a Latin phrase. But a Finance Minister saying Act of God, then it is being taken in humour,” Sitharaman said.

“Forced measures in court for my client is very well but not Act of God because it is minister … who looks like my neighbourhood auntie so how can she ever say this. I like this condescension. If you can invoke forced measures in courts and if internationally everybody is talking the impact of a pandemic for which we don’t have a vaccine till today… To twist what I have said to say that the Centre is reneging its responsibility. This is an irresponsible comment towards responsible government led by PM Modi,” she said.

“This is probably the first time that this kind of amount has been even pitched in supplementary demand because the gross additional expenditure of Rs 2,35,852 crore with a net cash outgo Rs 1,66,983 crores is one of the highest that budgets have seen in the country,” the minister added.

The Centre has sought permission for additional spending of Rs 2.35 lakh crores in 2020-21 through supplementary demands for grants.

Sitharaman said that the government is not contemplating increasing taxes to compensate loss in revenues due to the coronavirus pandemic.

Sitharaman said that the Centre has devolved Rs 1.76 lakh crores to states despite a gross tax revenue fall.

“The revenue fell down by 29 per cent but devolution to states have happened without disruption. We have devolved Rs 1.76 lakh crores which is down 11.96 per cent,” she said.

“I have not stopped any payment to states, devolution has happened, 49 per cent has been given to the states of the total gross that has been collected. Last year, it was only 41 per cent which was devolved between April-July,” she said.

The minister said that the central government has given 19 per cent more total transfer to states both tax and grants put together.

“Total transfer to states exceeds the Centre’s gross tax revenue. It is at 107 per cent per cent. Whatever money we have kept for our expenditure, is all borrowed. This is the story. Centre definitely has gone much beyond that it had in protecting the states’ interest. 61 per cent has already been given from what it has been put in the budget provision. I am frontloading the expenditure so that states won’t be devoid,” she said.

Sitharaman said that the total expenditure on MNREGA has touched Rs 1 lakh crores. “MNREGA has an additional demand of Rs 40,000 crores that is one of the main features here. In the budget speech, I mentioned that we will be spending about Rs 61,500 crores for MNREGA. With the addition of Rs 40,000 crores, it touches Rs 1 lakh crores. Our opponents should also recognise that it is no good constantly reminding us that we are using MNREGA now and we said it will not be there ‘marega MNREGA’ and all that,” she said.

“Launching Mahatma Gandhi NREGS is one thing and using it effectively is another. This is mentioned in the CAG report. In 2009-10, budget estimate was Rs 39,100 crores and only Rs 33,000 crores were used,” she said.

The minister said MNREGA wages have been increased from Rs 182 to Rs 202. The Lok Sabha also took up demands for excess grants for 2016-17 and passed the relevant appropriation bills.