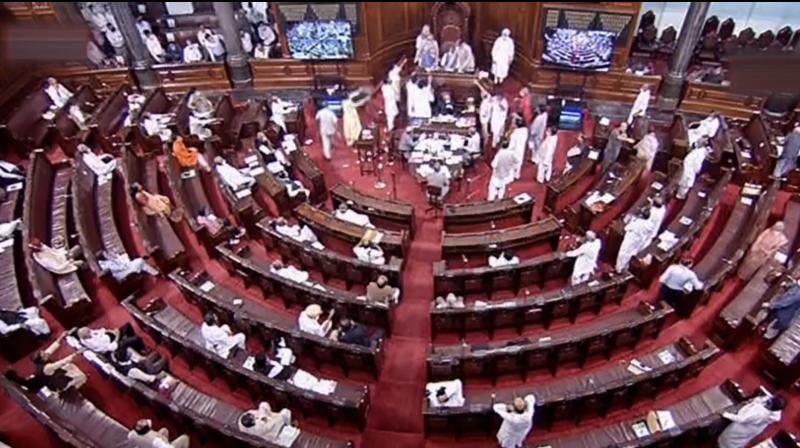 New Delhi: Some opposition members led by the TMC climbed on to the chairman’s podium, tore official papers, and heckled the presiding officer as they opposed the government’s push to pass two contentious farm bills on Sunday without considering their demand for sending the proposed legislations to a house committee.

Ruckus prevailed after Deputy Chairman Harivansh overruled opposition pleas for postponing Agriculture Minister Narendra Singh Tomar’s reply to the debate on the two bills till Monday as the scheduled sitting time of the House was over.

As slogan-shouting opposition members rushed into the well, Harivansh put motions by Congress, TMC, DMK and CPM members for sending the bills to a select committee of Rajya Sabha for greater scrutiny, for vote.

He declared the motions have been negated by voice vote even as movers of the motion sought division of votes.

As the Chair took clause-by-clause passage of the bills, Derek O’Brien of the TMC and some other opposition members climbed on to the podium showing the rule book to Harivansh.

Some members tore official papers. Slogan-shouting members tried to heckle the presiding officer who was protected by House marshals.

As unruly scenes prevailed, mikes installed in the House were muted and a few minutes later the proceedings were adjourned for around 15 minutes.

When the House re-assembled, the opposition members were again in the well chanting slogans. At least one of them climbed on the table of officials.

Harivansh said a division of vote cannot be sought from the well of the House and insisted they should first return to their seats.

As per procedure lobbies have to be cleared for enabling electronic voting on a legislation.

Amid the uproar and slogan-shouting, the Deputy Chairman put the two bills — Farmer’s Produce Trade and Commerce (Promotion and Facilitation) Bill, 2020, and the Farmers (Empowerment and Protection) Agreement of Price Assurance and Farm Services Bill, 2020 — for approval through voice vote.

With government having numbers of its favour the bills were passed. This completes parliamentary approval process for legislation of the bills.