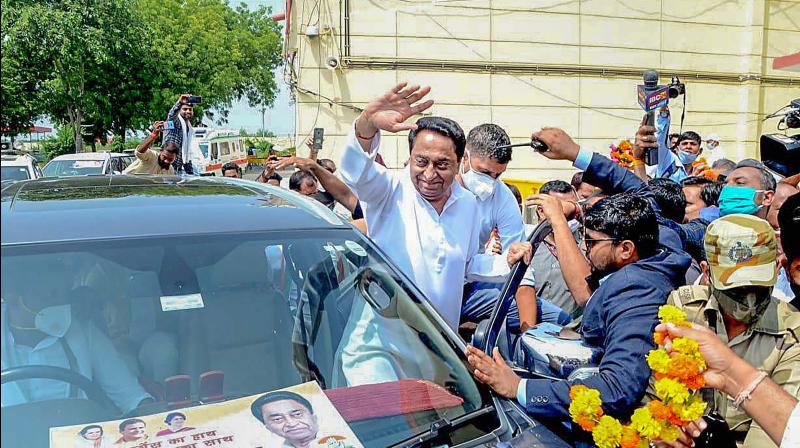 Bhopal: Setting the tone for the upcoming by-elections in 28 assembly elections in Madhya Pradesh, veteran leader Kamal Nath on Saturday launched a no-holds-barred attack against his nemesis Jyotiraditya Scindia in the latter’s stronghold of Gwalior, saying that the Congress Legislature Party (CLP) had rejected him (Scindia) as leader, nipping in bud his ambition to become chief minister after Congress returned to power in the state in the 2018 polls.

Breaking his silence on his ‘rift’ with  Scindia which culminated in the latter quitting Congress in March this year leading to fall of his 15-month-old government, Nath said, “The particular leader who is claiming that he was denied the post of chief minister knows very well that the Congress Legislature Party (CLP) had rejected him as leader (after Congress returned to power in the state in 2018 assembly polls) as he commanded support of only 18 MLAs (in the 114-member-CLP)”.

Nath was talking to reporters in Gwalior.

The former chief minister also squarely blamed Mr Scindia for backwardness of Gwalior-Chambal, saying that the latter was taking all decisions relating to the region during the previous Congress regime in the state.

“I had left it to Mr Scindia to take decisions regarding development of the Gwalior-Chambal region when I was chief minister. But, I feel disheartened to see that the region lacked even basic amenities. Now the situation has changed and I am taking the responsibility of development of the region”, he said.

Nath also accused Scindia of bargaining with BJP to topple his government.

“People know who bargained (with BJP) for power and who is merchant of power”, Mr Nath quipped in an indirect dig at Mr Scindia.

Scindia had snapped his 2-decade-old ties with Congress in March following his differences with Nath, leading to resignation of 22 Congress legislators from assembly as well as the party. This led to fall of Kamal Nath government.

State BJP president V D Sharma however countered Nath saying that that the latter had neglected Gwalior-Chambal region when he was chief minister of the state.

“Nath sat on the Chambal Expressway project and also on the project to supply drinking water to Gwalior from the Chambal river, when he was chief minister. Besides, Nath had committed a fraud on the farmers by issuing them crop loan waiver certificates without writing off their loans which denied them fresh crop loans”, Sharma said.

Nath should explain why he had gone back on his promise to waive crop loans up to Rs two lakh each to the farmers and give allowance to the unemployed youths when he was chief minister, he added.