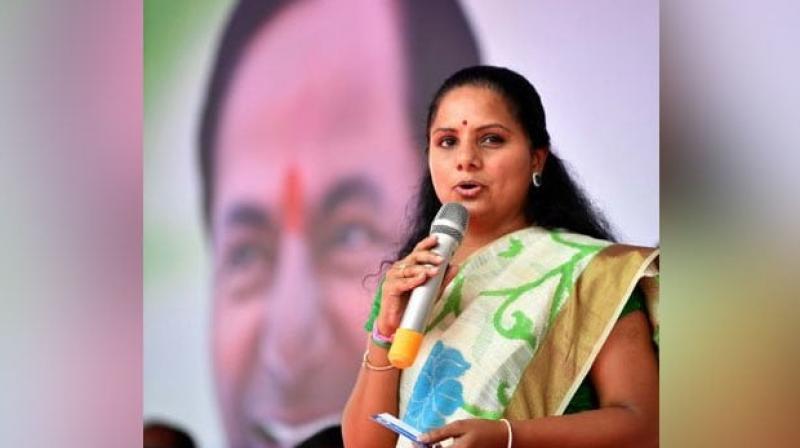 Kavitha had joined the Telangana statehood campaign in 2008 after returning from the US and gave a cultural thrust to the movement by launching an NGO called Telangana Jagruthi to connect the spirit of  Telangana with the movement.
The Twitter journey of Kavitha began in the year 2010 on Twitter as a voice that represented the interests of the Telangana statehood movement. Since then she has never missed a chance to echo people’s voice and sentiments physically and virtually, weaved her Twitter journey with a mix of politics and emotions.

She tapped into the power of social media to connect with natives across the world, through the NGO Telangana Jagruthi and her efforts yielded to garnering the national attention of Telangana’s “Bathukamma Festival. Kavitha ran various campaigns on social media which includes #SistersForChange and #GiftAHelmet which saw massive engagement online and on-ground scores of common people and celebrities joined the bandwagon that led to a national Twitter trend during every Raksha Bandhan festival.

Her latest campaign #ThankYouWarriors that Kavitha had run to thank COVID-19 frontline warriors while serving the society have left a long-lasting digital and real impression upon people. As a leader Kavitha used the platform from the very beginning not just to connect with her mass supporter base but she has been an active voice in expressing her consent, dissent, and expectations from the
establishments.

Delighted with reaching one million followers, Ms Kavitha speaking with Deccan Chronicle said “All I can say is that the followers on twitter have been very kind.”
Explaining the efforts in reaching the greater number of people not only to just spread out the ideologies but to serve the people who are in distress and dire needs, Kavitha said “my intention and endeavour is to serve society and it has always been reflected on my social media handles.”

She said “I can proudly say that due to social media only we are able to serve the people through offering free meals to the needy in my constituency (Nizamabad) for the last three years. It gives me an opportunity to serve the number of people during this COVID crisis and also extend a helping hand in bringing students, migrants and people in distress stuck abroad and within national borders back to their state.”

Replying to a question with regard to the kind of back office support she had to deal with the grievances of people and to help them, Kavitha said “whoever comes up with any request, my office and I try very sincerely to address their concerns. As a result, I believe that the last one year it has grown, and I believe social media today has become a great tool in the hands of the common man.”

She felt that “the more space we give for social media and the more interaction of the public representatives and authorities on the social media, I believe the reach to the common man, which is the ultimate goal for any system in this country will be fulfilled and we will be a true democracy.”

Kavitha said “I have a great deal of youngsters who work with me. We are a team and not from now, but they were here since the Telangana movement. They all work with me and a few people have certain assigned jobs to handle. At the end of the day, it is TRS party Karyakartas and Jagruthi workers at the ground level. They are the ones who coordinate and deliver a lot of the work.”

Answering a question pertaining to resolve the grievances of people with the government departments, Kavitha said “it is all about coordinating and making sure the work is done with a great deal of follow-up. A common man approaches a public representative with the hope that it will be solved but he doesn’t know what goes on behind it or how the matter would be resolved.”

She explained that “suppose if somebody has an issue with their land patta clearing up or their name coming into the land records, they would simply go give an application to a public representative and they have no clue what else to do. The rest of the procedure is taken care of by my office, if the issue or request is genuine.”

Kavitha said “I want to add one more thing. What has happened is that once people understood that in this state leaders react to social media, like my brother KT Rama Rao who is very active on social media and he reacts to requests also quite often. I have seen many women creating social media handles and sending me special requests and we address the same.

She said “so what is seen on social media is like a public request. There are many requests which directly come to us as well, which are hidden requests, we follow up with them too. They’re actually tenfold to what you see. So that’s much richer. So, I believe that in a way it is an empowering tool for the women too.”