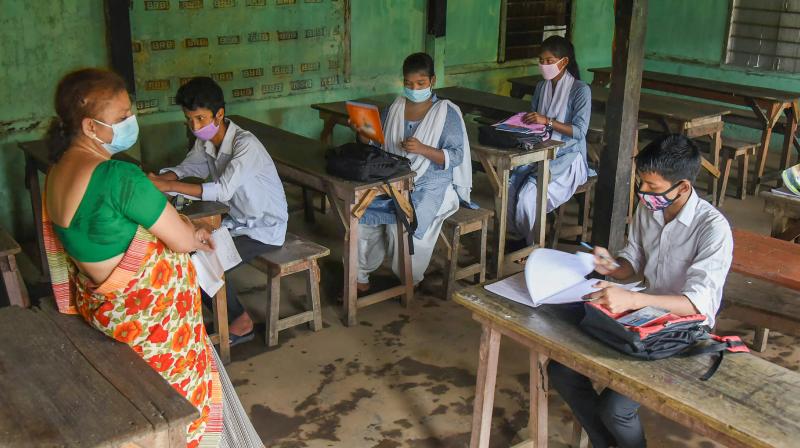 As the schools begin to partially reopen for classes 9-12 in the state, as per the direction of the Centre in its Unlock-4 guidelines, parents, students as well as the teachers have expressed their reluctance in exposing themselves to the infection prone world outside.

Even as all government school teachers will start taking classes in a staggered manner from the school premises, as per the government order, most private schools in the state have decided to carry on with only the online classes until next month, instead of allowing anyone at the premises. For example, Glendale Academy has decided only to allow management staff and prepare a plan to call teachers when required, informed Minu Salooja, Asst Director, Glendale Academy. Meridian School, meanwhile, has decided to not hold any sessions at the school until late next month. Johnson Grammar School, in contrast, has prepared a time table to allow students to visit the school for subject wise doubt clearing sessions. Other private budget schools have also decided to not open schools.

The decision has been taken considering concerns raised by teachers over exposure to the infection and the potential risk it would pose for their family members. Government school teachers have also requested exemption citing similar concerns. However, in the absence of state government guidelines in this regard, no exemption is likely to be provided, said Chava Ravi, Telangana State United Teachers Federation (TSUTF) General Secretary.

Government school teachers from various districts have raised concerns with regards to absence of sanitisation, deep cleaning at the premises. A teacher on condition of anonymity said, “It is our duty to help the students in whatever way is required of us, but ensuring our safety and safety of children is the responsibility of the government. Even as Gram Panchayats have been taking care of cleaning and sanitisation at the school, not every school’s safety is being taken care of in various villages”. Teachers say the government has not provided any masks or sanitisers to students and/or teachers despite the reopening. “Our safety is in our hands only it seems”, said another concerned government school teacher.