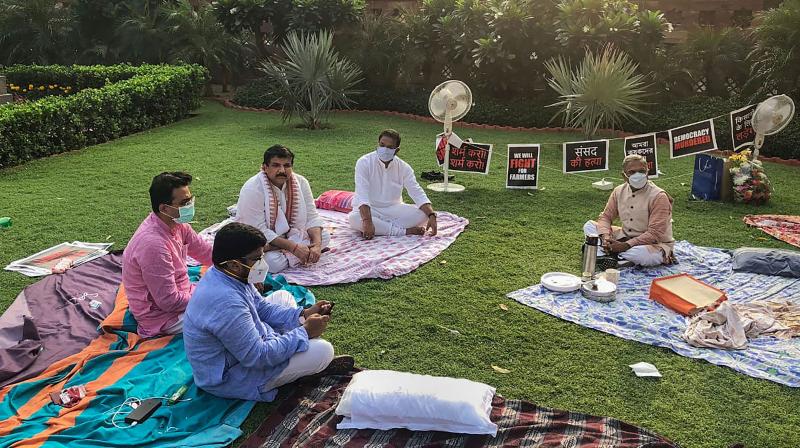 Tuesday turned out to be a day of symbolic fasting as two Rajya Sabha MPs, NCP chief Sharad Pawar and Rajya Sabha deputy chairman Harivansh, decided to go on an one-day fast for diametrically opposite reasons. While Pawar announced his fast in response to the suspension of eight Opposition MPs who were protesting against the two controversial farm bills, the Rajya Sabha deputy chairman hoped his fast may inspire a feeling of “self-purification” within the parliamentarians who “humiliated” him.

Eight Rajya Sabha MPs were suspended from the House on Monday for their “misconduct” during the passage of two farm bills on Sunday. Some of them threw rule book, tore its page and climbed the secretary general’s table as they attacked Harivansh for going ahead with the process of the bills’ passage.

Addressing a press conference in Mumbai, Pawar bemoaned the conduct of Deputy Chairman Harivansh and the Modi government”s decision of “bulldozing” the Opposition in the House. The eight MPs were expelled for expressing their opinion, Pawar said, adding the depty chairman did not give priority to (House) rules.

The whole fasting drama began in the morning after Harivansh offered tea to Opposition MPs sitting on dharna in Parliament complex, and also wrote a letter to Rajya Sabha Chairman M Venkaiah Naidu, who is also the Vice President, besides the President in which he recalled his journey from a humble background and expressed his deep anguish at the “humiliating” conduct of several Opposition members towards him during the passage of farm bills on Sunday.

Meanwhile, PM Modi hailed Harivansh’s offer to tea to the suspended MPs and said the “inspiring” and “statesmanlike” conduct of Harivansh will make every democracy lover proud.

On the Rajya Sabha deputy chairman’s letter to the president and the vice-president, Modi said, “I read the letter respected Harivansh ji wrote to the respected President. Every word of the letter has infused new confidence in our faith in democracy. This letter is inspirational and laudable too. There is truth in it and sensitivity too. I request every countryman to read it.”

Praising the Rajya Sabha deputy chairman’s gesture to the MPs on dharna, Modi said, “To personally serve tea to those who attacked and insulted him a few days ago as well as those sitting on dharna shows that Harivansh Ji has been blessed with a humble mind and a big heart. It shows his greatness. I join the people of India in congratulating Harivansh Ji.”

The prime minister added, “For centuries, the great land of Bihar has been teaching us the values of democracy.”