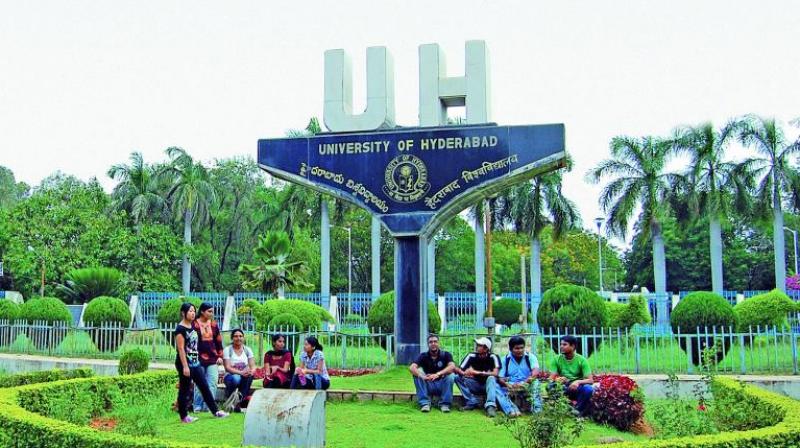 The University of Hyderabad (UoH) will begin their nationwide entrance exams for Integrated Post Graduate courses, PG courses, MPhil and PhD programs, despite major opposition from the student body at the varsity, from September 24 to 26.

The Student Union of the UoH-HCU had demanded for a postponement of the entrance exams citing a possible clash between the entrance and ongoing undergraduate final semester exams in the state, as well as the TS-EAMCET 2020. Incidentally, The National Test Agency (NTA) has moved the date for the UGC-NET an eligibility test for MPhil and PhD courses for many universities and for fellowships to September 25, leaving some students to have to choose between the two options.

The University spokesperson, Prof. Vinod Pavarala, however on Tuesday told Deccan Chronicle that there was no chance now to make any changes to the schedule. He said, “We had announced the dates for these entrance exams a month ago, keeping in mind all other exam dates, including UGC-NET. The Telangana government decided on conducting the final semester exams much later and the date for NET was recently changed.  All arrangements have been made across the country, resources and observers, and even some applicants have reached the centres. Any change at this point is not possible.”

He further suggested students to appear for NET in the second spell of exams due in December. He said that students should appear for the university entrance exams since UoH does not give admission based on NET qualifications. He further added that after deliberations with the TSCHE, it has been ensured that there will be no subject wise clash between these and the final semester exams, and if such a situation arises they will be given a conditional admit.

In case of entrance examination centers in Raipur in Chhattisgarh and Imphal in Manipur, that have been denied permission to conduct exams, students who have been assigned to these centres, will be able appear at any other convenient centre out of the 35 centres, with one-day notice to the Controller of Examination through an email.

The authorities have also ensured that if a student feels unwell or uncomfortable at the examination center will be allowed to leave the examination after completion, as per their wish. Any students found to be having a fever or any other symptom of illness, shall be given a separate room to write their entrance exam.