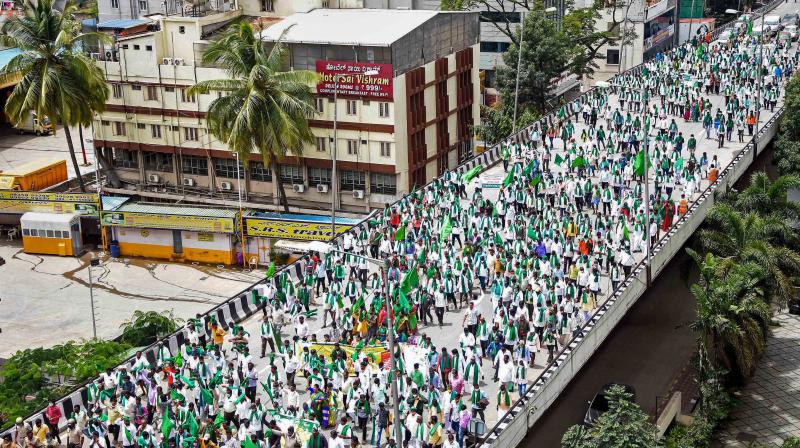 Bengaluru: Karnataka government introduced Land Reforms (Amendment) Bill, aimed at removing restrictions on anyone purchasing agriculture land. Even though farmers are protesting against the move, farmer groups in the State are undecided whether to participate in the Karnataka Bandh on Friday or not.

Already, left parties, along with over 35 organisations have decided to participate in the bandh, which will be part of All India bandh called by various farmer organisations. However, two major farmer groups, which spearheaded massive rally on Monday, protesting against the Land Reforms Bill are yet to take a decision on participating in the Karnataka bandh.

As far as Karnataka is concerned, State government had brought two major amendments through Ordinance, that affected interest of farmers. First was to amend Land Reforms Act and the second one was amending APMC Act. Now, bills have been introduced in the Legislature to ratify the Ordinances, which is being opposed by farmer groups.

Meanwhile, JD(S) has decided to participate in the Karnataka bandh. Though Congress is not directly participating in the bandh, KPCC President D K Shivakumar went to agitating farmers and said that his party would support the bandh and oppose the bills in both Legislative Assembly and Legislative Council.
Meanwhile, like in Center, BJP also lack majority in the Upper House in Karnataka.

Congress and JD(S) have decided to join hands in the Upper House to defeat the bill. However, the two parties have not come to a formal decision over the issue.