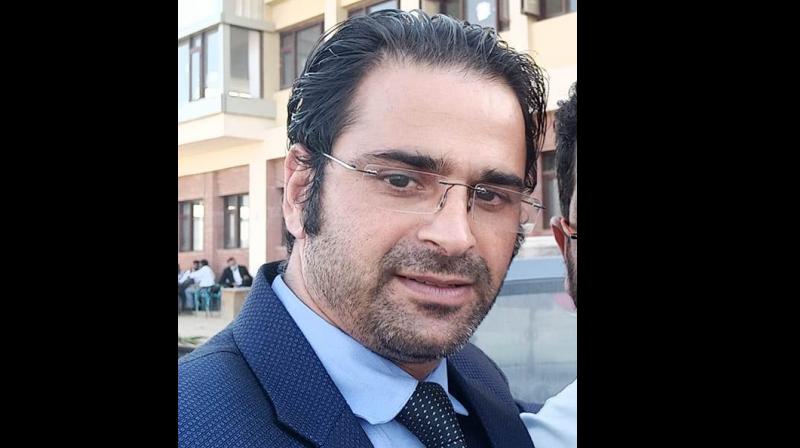 Srinagar: A lawyer was shot and critically wounded by unknown assailants in central Srinagar on Thursday evening. He was rushed to hospital where doctors pronounced him dead on arrival.

Babar Qadri, 35, was a prominent figure in prime time debates on Kashmir on various TV channels.

Police said he was attacked by suspected militants in the Hawal area of Srinagar. “The gunmen shot him at point blank range, killing him instantly,” said a police officer who works in that area.

The medical superintendent of the Sher-i-Kashmir Institute of Medical Sciences (SKIMS), Dr. Farooq Jan, confirmed that Qadri was brought dead to the hospital.

He had received a single bullet wound.

Father of two minor daughters, Qadri had launched a political party called All JK People’s Justice Party some time ago and named himself as its president.

Reacting to that ruling, Qadri had said in a statement, “When I formed a Lawyers Club of Kashmir, I was accused of dancing on the tunes of Indian agencies. Now when I work for unity and want to (re)join, the passage is blocked to me.”

Babar Qadri wrote on his Facebook wall on Wednesda, “The bar needs a moderate but intelligent leading group. We need good speakers, good debating persons who can talk on our behalf. We need a person who can confront a judge or an official of the administration. Yes we got enough exploited by emotional blackmail, coercion and threats to life which was a norm that we were made used to. Now the change is on plate, go and have it. The traditional DOPE LALLAN should now be buried down alongside Covid-19”.

Mourning the murder of Qadri, former chief minister Omar Abdullah tweeted, “The assassination of Babar Qadri this evening is tragic & I unequivocally condemn it. The sense of tragedy is all the more because he warned of the threat. Sadly his warning was his last tweet. @BabarTruth”.

In a tweet tagging the Jammu police, Qadri had sought action against a person who had written on the micro-blogging site that he (Qadri) was being promoted by official agencies. Qadri’s tweet read, “I urge the state Police administration to register FIR against this Shah Nazir who has spread wrong campaign that I work for agencies. This untrue statement can lead to threat to my life. @ZPHQJammu”.

Ironically, in TV debates, Qadri used to be accused by fellow panelists of being a “Pakistani agent.” At one such show on CNN News18, a retired Army officer, Maj Gen S S Sinha said, “Syed Babar Qadri is an agent of Pakistan.”

Several members of the KHCBA have condemned Qadri’s killing and demanded an impartial probe by credible organisations into his murder.