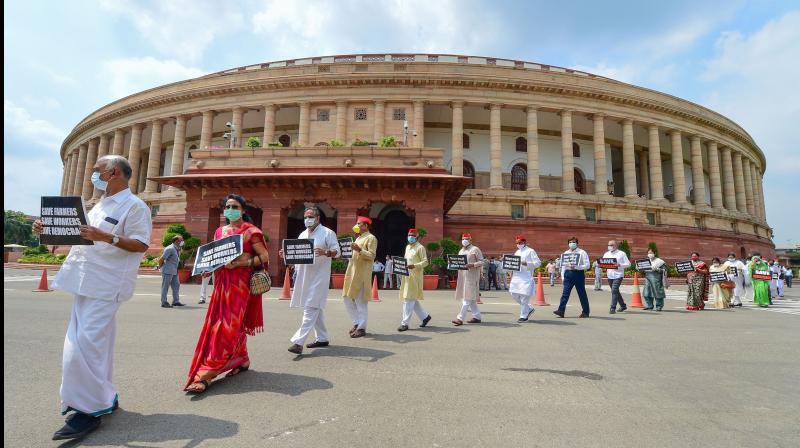 Parliament’s Monsoon Session, held amid the raging Covid-19 pandemic, was adjourned sine die Wednesday, eight days before it was to end, due to the growing coronavirus threat, as minister of state for railways Suresh Angadi, BJP MP from Karnataka, died from the disease minutes after the session ended. Several MPs from both Houses had skipped the session due to the health risk.

The truncated session’s highlight was passage of the controversial farm bills, that triggered farmers’ agitations across India and a political storm as key NDA ally Akali Dal opposed the bills and food processing minister Harsimrat Kaur Badal resigned from the Cabinet.

Overall, 25 bills were passed by the Lok Sabha and a long discussion was held on the pandemic. Among key bills passed were the Essential Commodities Amendment Bill, Industries Code Bill and the J&K Official Language Bill, besides the demands for grants for 2020-21.

Mr Angadi was the third sitting Lok Sabha MP to die of the virus, after YSR Congress MP Tirupati B. Durga Prasad and Congress’ H. Vasanth Kumar, who died earlier this month.

Speaker Om Birla expressed satisfaction that despite the extraordinary circumstances, the session’s productivity was 167 per cent. Birla adjourned the House sine die after passage of the Major Port Authorities Bill. The Prime Minister was present when the House was adjourned.

In the Rajya Sabha, before adjourning sine die earlier on Wednesday, Chairman M. Venkaiah Naidu urged members in a valedictory speech to ensure that the “unseemly behaviour” that led to the suspension of eight Opposition MPs was not repeated, saying while it was the Opposition’s right to protest, the question was how it should be done.

Naidu said the Upper House’s productivity had been 100.47 per cent in the session, with 25 bills passed, but there were some areas of concern – for the first time a notice for the deputy chairman’s removal had been submitted.

A spate of protests marked the session’s last day, as Opposition MPs from both Houses boycotted proceedings and held silent marches within the Parliament complex against the passage of the “anti-farmer and anti-labour bills”, and some even marched to Vijay Chowk with bundles of paddy in their hands.