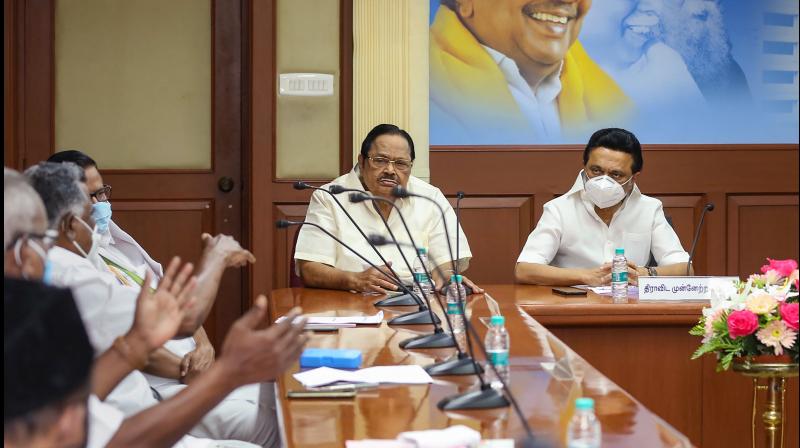 Chennai: DMK President M K Stalin lashed out at Chief Minister Edappadi K Palaniswami for the AIADMK’s support to the controversial farmers’ bills in Parliament while Revenue Minister R B Udhayakumar accused Stalin of raring to start a political fight over the issue on Wednesday.

Speaking to the media after attending a Covid-19 related event in Chennai, Udhayakumar said the Chief Minister had clarified that the bills would not be detrimental to the interest of farmers and charged Stalin with launching a false propaganda.

Stalin in a lengthy statement said Palaniswami had no moral right to call himself a farmer as a farmer would not support an anti-farmer legislation, adding that the bill that the AIADMK had supported did not even mention ‘minimum support price,’ something for which farmers in the country had been fighting for.

Reacting to Palaniswami’s remarks that Stalin did not know anything about agriculture, he said that to express an opinion on a bill, one need not be a farmer. Basic knowledge on farming and concern for farmers would do, he said, adding that Palaniswami lacked them.

Raising a series of questions to the Chief Minister, Stalin asked if the AIADMK MP, S R Balasubramanian, who spoke against the Bills in Rajya Sabha did not know anything about farming.

Or, did the thousands of farmers who walked to lay siege to Fort St George or the lakhs of farmers protesting in north India or the NDA Minister who resigned her post on the issue not know anything about farming,? Stalin asked.

He also mentioned about the leaders of 18 opposition political parties urging the President not to give sanction to the Bills and the articles published in traditional newspapers like The Hindu and Deccan Chronicle against the Bills and asked the Chief Minister if they too did not know anything about farming.

The adverse effects of the Bills had been listed out in the advertisement put out by the DMK’s farmer workers union, he said.

Alleging corruption in various farmers’ schemes like kudi mamarathu (the traditional way of keeping water bodies clean), desilting of canals for providing water to farmlands and Prime Minister’s Kisan Scheme, Stalin said a farmer would not indulge in corruption in a scheme to benefit farmers.