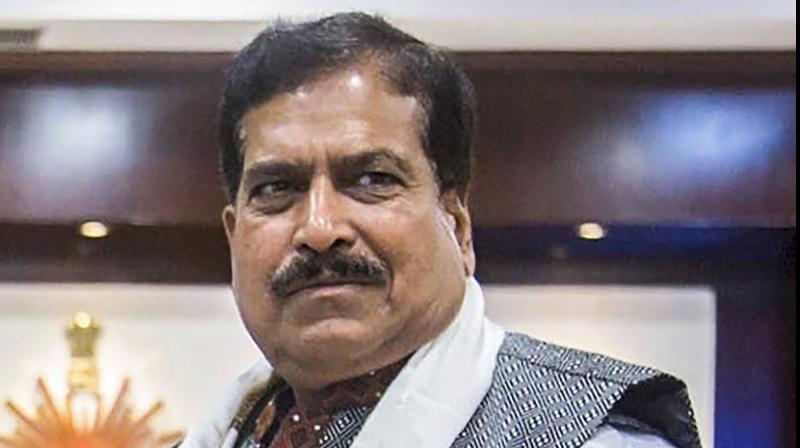 Hubballi: Union minister of State for railways Suresh Angadi (65) is succumbed to Corona virus on Wednesday. He was representing Belagavi Lok Sabha constituency. He is first union minister who died due to the virus. Born in the Koppa village of Belagavi, Suresh Angadi obtained a law degree from the Raja Lakhamgouda Law Colleg e in the district.

Earlier this month he was admitted to AIIMS in Delhi after he contracted coronavirus disease.
Angadi is the second Member of Parliament who died due to coronavirus. He is survived by his wife and two daughters. He has given yeoman contribution as a minister for the development of railway lines in North Karnataka including Belagavi- Dharwad railway line.

A fourth-term parliamentarian from Belagavi in Karnataka, Angadi had on September 11 announced on Twitter that he had contracted the disease and had requested all those who came in close contact with him in the previous days to monitor their health and get tested in case of any symptoms. He is the first Union minister to have died of coronavirus. At least six MLAs and three MPs have earlier succumbed to it. Former president Pranab Mukherjee, who died on August 31, was also diagnosed as COVID-19 positive.

President Ram Nath Kovind, Prime Minister Narendra Modi, several Union ministers and BJP leaders condoled the death of Angadi. The national flag will be flown at half mast on Thursday in all government offices in Delhi, the home ministry said.

Born on June 1, 1955 in a Lingayat family to Somawwa and Channabasappa Angadi in Koppa village in Belagavi, Angadi graduated from SSS Samiti College of Commerce in the same district. He did his law graduation from Raja Lakhamgouda Law College in Belagavi.

A businessman by profession, Angadi got a major break in his political career when he was appointed as BJP vice president in Belagavi in 1996, and worked his way up in the party.

He was elected MP in the Lok Sabha election in 2004, and again in 2009. He was elected for a third term in 2014, when the BJP came to power at the Centre, and for a fourth term in the general election last year, after which he was made Union Minister of State for Railways.

As the junior Railway Minister, Angadi was soft spoken but stern while responding to media queries on various aspects of the national transporters performance. He was always armed with facts and figures of projects that were underway while addressing the media.

Angadi was instrumental in pushing through the long pending Bengaluru suburban rail service. The Rs 15,990 crore project aims to connect 148.17km of the city through four corridors and has a 2025 deadline.

“Shocked to know the passing away of Shri Suresh Angadi, Union Minister of State of Railways. An amiable leader Shri Angadi worked tirelessly for the people of his constituency, Belagavi and Karnataka,” tweeted Kovind.

“Shri Suresh Angadi was an exceptional Karyakarta, who worked hard to make the Party strong in Karnataka. He was a dedicated MP and effective Minister, admired across the spectrum. His demise is saddening. My thoughts are with his family and friends in this sad hour. Om Shanti,” Modi said on Twitter.

Union Home Minister Amit Shah expressed grief over the demise of Angadi and said he will always be remembered for his selfless service to the nation and the BJP.

BJP president JP Nadda described him as a leader who dedicated his life to the organisation.

“Extremely saddened by the passing away of Central Minister Shri Suresh Angadi Ji. He was a remarkable leader who dedicated all his life for organisation and went on to serve society with utmost diligence and compassion. My thoughts and Prayers are with his family and followers,” he tweeted.

Railway Minister Piyush Goyal said on the micro-blogging website, “Deeply anguished at the unfortunate demise of Suresh Angadi ji. He was like my brother. Words fall short to describe his commitment & dedication towards the people. My thoughts and prayers are with his family and friends in this hour of need. Om Shanti”.

Former prime minister and JDS chief HD Deve Gowda expressed his sadness over the demise and tweeted that Angadi was like a “younger brother”.

“Shocked & Saddened by news of my MoS colleague, Shri Suresh Angadi ji’s passing away. It is an unfathomable loss to the Government, people of Karnataka & the Party. His selfless service during COVID19 is still vivid before our eyes. My condolences to his family,” tweeted Minister of State for Home G Kishan Reddy.

Karnataka Chief Minister B S Yediyurappa said he was shocked to learn about Angadi’s demise. He remembered Angadi as a “polite, gentle and popular leader” and said his death is a “great loss not only to the party, the state but also to the entire country”.